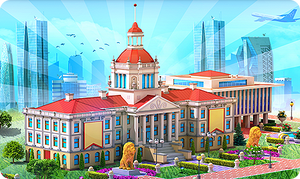 Create your own state or join an existing one to exchange materials with other mayors and help each other. Unite in states with players around the world!

The State is a gameplay feature introduced on December 12, 2017. Each state itself represents a group of players who work together on developing their state by completing tasks, exchanging building materials, etc...

Properties of a State 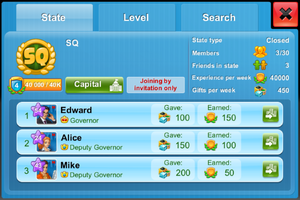 Besides joining an existing state, the player has the opportunity to create an own state. Therefore (s)he has to reached at least Level 15. 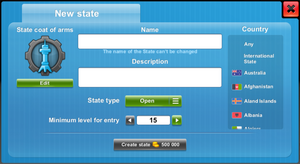 . The player can customise his state by following paramaters: 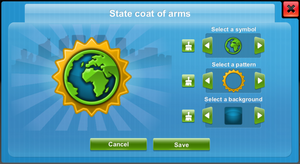 The state emblem is also has to be specified when the state is created and can be changed at any time. The coat of arms can compose up to 3 parts: symbol, shape and background. After creating the state, the state emblem will be displayed in the friends' ribbon. It can be chosen between 24 symbols, 19 shapes, 20 backgrounds and the 6 proposed colors (green, blue, dark grey, red, silver and yellow) for each of the emblem parts.

Since the initiation of state contests the state can obtain aditional state symbols and shapes.

If the staffs set the state type on "open", any player can join the state at any time as long as (s)he reached the required entering level. If the state type is "closed", the player needs an invitation by state members. Sending an application for joining is possible if the type is set on "by application", the (Deputy) Governor decides whether to accept the invitation or deny. As soon as the player joins a state, the State Hall changes its level, depending on the state's development level, and the state's coat of arms appears on the State Hall ribbons. Leaving the state is possible at any time, and will undo all state progress for the player.

The state's development identifies by collected State Experience. To earn state experience the members have to complete tasks at the different State Administrations. Every district has its own administration building. At the beginning every state has level 1. New districts and infrastructures are unlocked if the state reaches higher levels. As of now, the experience bar reaches a maximum of 650,000

The state can also be developed by upgrading quarter buildings (business districts, complexes etc.), train stations, resource buildings and infrastructures. For each building there are 3 building materials to invest in all which can be obtained by completing tasks at the Center of Ocean Transport. A member can own 500 materials at once.

During an update on Mon January 20, 2020 the old production buildings were removed and therefore the contract tasks as well.

The State gameplay feature is remarkable for providing the possibility for players to send messages. Maximally 50 messages are visible in the chat history and one message can contain up to 100 characters, emojis included. Additionally state members can send material requests and can share required materials (max 5 items of the same type). The green request button

is left of the message input-box. A request lasts 8 hours and disappears after members sended all 5 items or the timer reached zero.
Messages appears automatically in the chatroom by following events:

Besides the "chat section" there is a "news section" (symbol: envelope) where only the governor and deputy governor(s) can send messages to the state community. 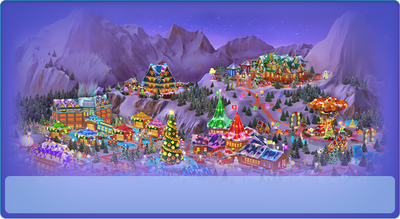 Since an update on Thu October 18, 2018 state members can compete against other states all around the world. A state contest lasts 7 days and repeats instantly again. Ten contests form one season → 70 days for a whole season. Since the contest Food Industry on Thu November 21, 2019 the period of a contest was reduced to 6 weeks (equals 42 days). During the contests the state has to collect State Experience

, Building Coupons and emblem parts) by earning ranking points. Every member of a state enter automatically the contest. Does a member leave or join a state after a contest started he won't be able to get all rewards that the state wins.
There are 7 leagues:

A state has to compete against 29 other states in a contest. Unlike in other leagues all states that reached the world league are combined in one group. Every league has a requirement of minimum State Experience to not move down. Is a season over the state is no more able the get season rewards but can still compete in "after contests" and can therefore earn ranking points and rewards. As a new season beginns the state starts in that league that the state would get into (stay, move up or move down) after the last contest.

For more information like "What are ranking points?", tap on the green info button in the upper left corner of the contest window. (Android/iOS)

The bank is a feature added to the state contests and was introduced on Thu August 8, 2019. State members have to earn state experience where all efforts of the members added up. It's a 10-stage progress where every stage has rewards and is labelled with a progress chest icon. A Chest Piggy Bank event lasts 3 days and after these all state members receive all rewards of the unlocked stages. Otherwise if the state earned 30,000

before the timer expires, all members get all rewards instantly after reaching state 10. The event starts one day after a state contest has begun. A member has to earn state experience if he want to receive all unlocked rewards by the state. The building rewards were previously in 4-n-Action Bargain sets available. Exceptional for the first 6 weeks in which the buildings originate from the very first 4-n-Action Bargain set that was never released.