The Santa's Hideaway is a Snowville building located in Snowville, southeast of Christmas Tree. It was originally introduced on December 14, 2017.[1]

Task of the mining game is to burst snow (white) and ice blocks (light blue) with explosive devices to obtain materials (only for snowville buildings), baubles

Effects of the explosive devices:

Some blocks are covered because they are outlined of other ones that have to be bursted to uncover them. When a block below the grey line - layer counter on the right side - is burst open, the grey line (layer) move down. Chests can be opened by 1

Every 50-60 layers there appears a vault full of different presents. 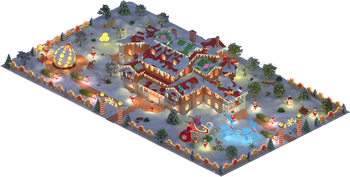 Retrieved from "https://sqmegapolis.fandom.com/wiki/Santa%27s_Hideaway_II?oldid=94931"
Community content is available under CC-BY-SA unless otherwise noted.