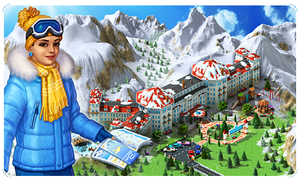 "Rocky Mountain Resort - The majestic Rocky Mountains are right outside Megapolis. It's the perfect place to build a ski resort!"

Rocky Mountains is a game zone that was added in an update on December 13, 2013.[1] It was unlocked for free, has a separate population

cap and uses a separate allocation of

based only upon the buildings in that zone, although

are shared between all zones. Unlike Tourist Island the basic Production building are available in this expansion. It does appear some infrastructure and production buildings are unavailable.

In addition to the expansion zone, the following construction sites become available when the Rocky Mountains zone is unlocked:

Initially, when unlocked, the Rocky Mountains expansion is ready with the following buildings:

Retrieved from "https://sqmegapolis.fandom.com/wiki/Rocky_Mountains?oldid=87324"
Community content is available under CC-BY-SA unless otherwise noted.