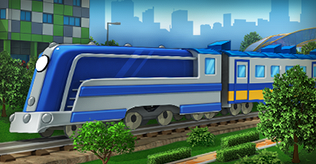 Railroad Marathon XIII is the thirteenth Railroad contest released by Social Quantum. It is a timed contest in which the player has 7 days to collect passengers

from stations and send them by external trains to accure contest points toward placement on a leaderboard comprising 30 players. It was released as part of an update on Thu May 3, 2018[1]. The player must have reached Level 24 to can participate at the contest.