The Military Shipyard is a military factory located in Megapolis Mainland, south-east of the Archipelago Island. It was originally introduced on Mon March 14, 2016.[1]

worth diagrams are needed to complete construction of the Military Shipyard. This is equivalent to 295

if one were to buy every asset instead of waiting to receive them from neighbors. 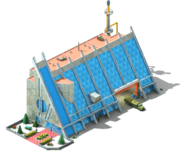