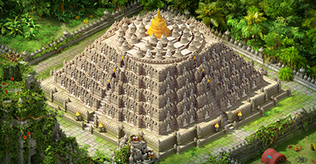 "Explore the Mysterious Cave, find artifacts and ancient coins. Hurry, the island will be unavailable after the hunt ends!"

Lost Island II is a special contest released by Social Quantum and the second one that takes place on Lost Island. It is a timed contest in which the player has 14 days to construct/clear buildings, complete contracts, collect benefits at buildings or the "mining game" to accrue points toward placement on a leaderboard. These special buildings are only available during the timed event. It was released as part of an update on Thu June 7, 2018[1].

On the last day of the contest, the player received an offer which doubled the amount of artefacts that could be obtained at certain fixed buildings or excavated at the Mysterious Cave. 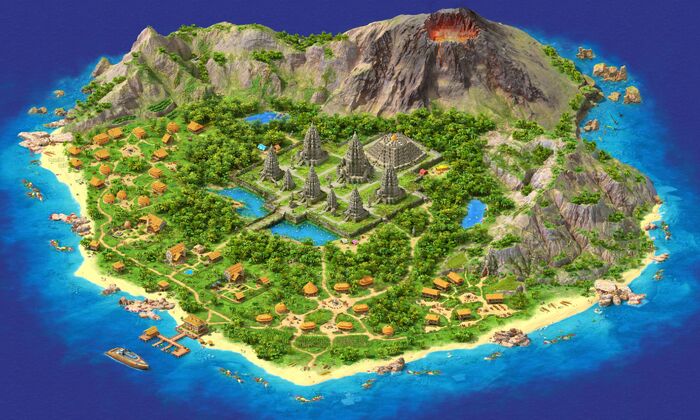 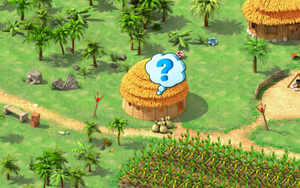 Lost Island is no longer accessible!

In this contest, all contest-related buildings were fixed on Lost Island and automatically purchased, except for Workshops II and III.

The actual contest begun 7 days after the start of the timed quest. The contest points were Artifacts

that could be obtained at fixed buildings on Lost Island when the contest was active. In the contest there were six leagues to which a player could be assigned.

These buildings were the prizes those at the top of the leaderboard would receive at the end of the event.

of all members of one state are added up. If a specific score is reached all state members recieve the prize of this score instantly. One investigation costs 5

The player was able to buy different items with ancient coins

that could be collected at fixed buildings, thought bubbles, the mining game and the timed quest (reward: 1,000

Here is a list of all thought bubble text messages: