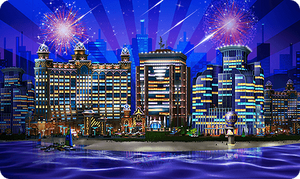 "Create your own Las Megas – the capital of nightlife and the gambling business!"

Las Megas is a game zone in Megapolis, which was introduced on 11.14.2014[1]. This is the fourth game zone introduced and the first to be directly named upon a real-life location, in this case Las Vegas, Nevada.

All the available infrastructures, residential, decorations and streets are redecorated for a night view. Initially, except for a couple of Las Megas-specific buildings, most of the purchasable objects are the same as those available in the main game zone, only redesigned for night.

Initially, when unlocked, the Las Megas expansion is ready with the following buildings and decorations:

Retrieved from "https://sqmegapolis.fandom.com/wiki/Las_Megas?oldid=97631"
Community content is available under CC-BY-SA unless otherwise noted.