This quest ties in with the simultaneous World Capitals (Washington D.C.) event with the quest building providing additional contest points in the mini-game.

"The self-determination and decisiveness of the citizens of one city led to a war for independence. And victory in this war lead to the independence of a huge country. To celebrate this day, build a little Boston in your Megapolis!

"The citizens are asking the mayor to: build the buildings of Boston

"Freedom and independence should be the foundations of all states. Megapolis is a free city and its inhabitants remember this. We must build monuments to independence in our city!" 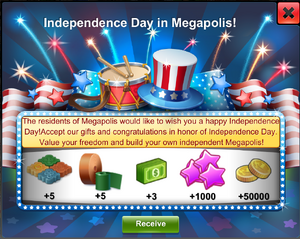 At the beginning of this timed quest in addition to the "Megapolis News" the User received a prompt "Independence Day in Megapolis!" and some gifts from Social Quantum.

"The residents of Megapolis would like to wish you a happy Independence Day! Accept our gifts and congratulations in honor of Independence Day. Value your freedom and build your own independent Megapolis!

Stage 1 - The Sun Over Boston

Boston is a unique city. The self-determination and decisiveness of its citizens led to a war for independence. And victory in this war led to the independence of a huge country.

Freedom and independence should be the foundations of all states. Build a little Boston in Megapolis to celebrate this!

You started building a city of independence in your Megapolis. You receive materials to successfully continue construction - you can find them in your Storehouse.

Faneuil Hall is a historical building where many champions of liberty gave speeches. Even earlier, there was a market in this building.

Did you know that Faneuil Hall is also called the Cradle of Liberty? Start constructing this beautiful building now!

And for building the Cradle of Liberty, you receive materials to continue construction. You can find them in your Storehouse.

Faneuil Hall is the eleventh of the sixteen points on the historical Freedom Trail in Boston.

Independence Day is sure to bring new citizens to your city. The important thing is to keep constructing new buildings!

Are you ready to walk the Freedom Trail? Be sure to tell your friends all about it!

The Freedom Trail is just 2.5 miles long. It's paved in red brick and includes markers with information on the city's history.

The Freedom Trail has a lot to tell us about the discovery of true independence. Walk the trail and get started with building the Massachusetts State House!

Great work! To speed up construction a little, you're getting free materials. Use them for the good of the city and in honor of independence!

Paul Revere was one of the most famous Boston citizens, a hero of the American revolution. It was he who rode on horseback all night to warn the patriots of their enemy's coming.

Build the frame of the Massachusetts State House on Beacon Hill and collect some coins - you'll receive the Paul Revere Monument as a reward.

As a reward for completing your task, you receive the Paul Revere Monument. You can find it in your Storehouse. Build it now and tell your friends!

Sometimes, the Massachusetts State House is called the New Statehouse to differentiate it from its predecessor. Both the old and new statehouses are included in the list of attractions on the Freedom Trail.

Wish your friends a happy Independence Day and build a new statehouse!

You've built a huge and beautiful building. Would you like to tell your friends about it?

Parkman Bandstand is a great place to relax. There's a wonderful gazebo there. You could write a great speech in there!

Create a new garden, but then don't forget to give an Independence Day speech to your citizens.

The citizens loved the mayor's Independence Day speech! Would you like to tell your friends about it?

Many families create their own traditions for the big holidays. And having a picnic in honor of Independence Day is one such tradition.

Complete a wonderful Family Picnic contract and build a Marketplace!

The weather was great and the picnic was a success! Would you like to tell your friends about it?

In 1776, the Declaration of Independence was read from the balcony of the Old State House.

The Old State House is a historical monument. Start construction of this beautiful building in Megapolis.

As a reward for completing a difficult task, you receive the King's Chapel. Be sure to tell your friends!

The Old State House is over 300 years old. It is one of the oldest buildings in Boston!

It's time to finish building the Old State House and start a Celebratory Parade!

Great work! Megapolis is becoming more and more beautiful with each passing day thanks to your efforts.

The Boston Public Library was built in a neo-renaissance style. It was the first library in the USA to allow citizens to borrow books!

Start building a public library and hold a celebratory parade in Megapolis!

You receive materials for successfully completing construction. You can find them in your Storehouse.

It's time to complete your Independence Day celebration in Megapolis. Remember this holiday and value the freedom you have!

Great work! The Old South Meeting House is now in your Storehouse. Build it and you'll get a new title!