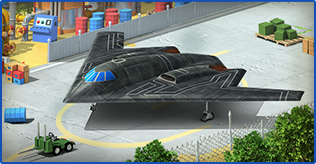 Arms Race VIII is the eighth Military contest released by Social Quantum. It is a timed contest in which the player has 7 days to construct military buildings or prototypes and complete operations to accrue military influence points toward placement on a leaderboard comprising 30 players. It was released as part of an update on February 16, 2017[1].

Retrieved from "https://sqmegapolis.fandom.com/wiki/Arms_Race_VIII?oldid=85590"
Community content is available under CC-BY-SA unless otherwise noted.